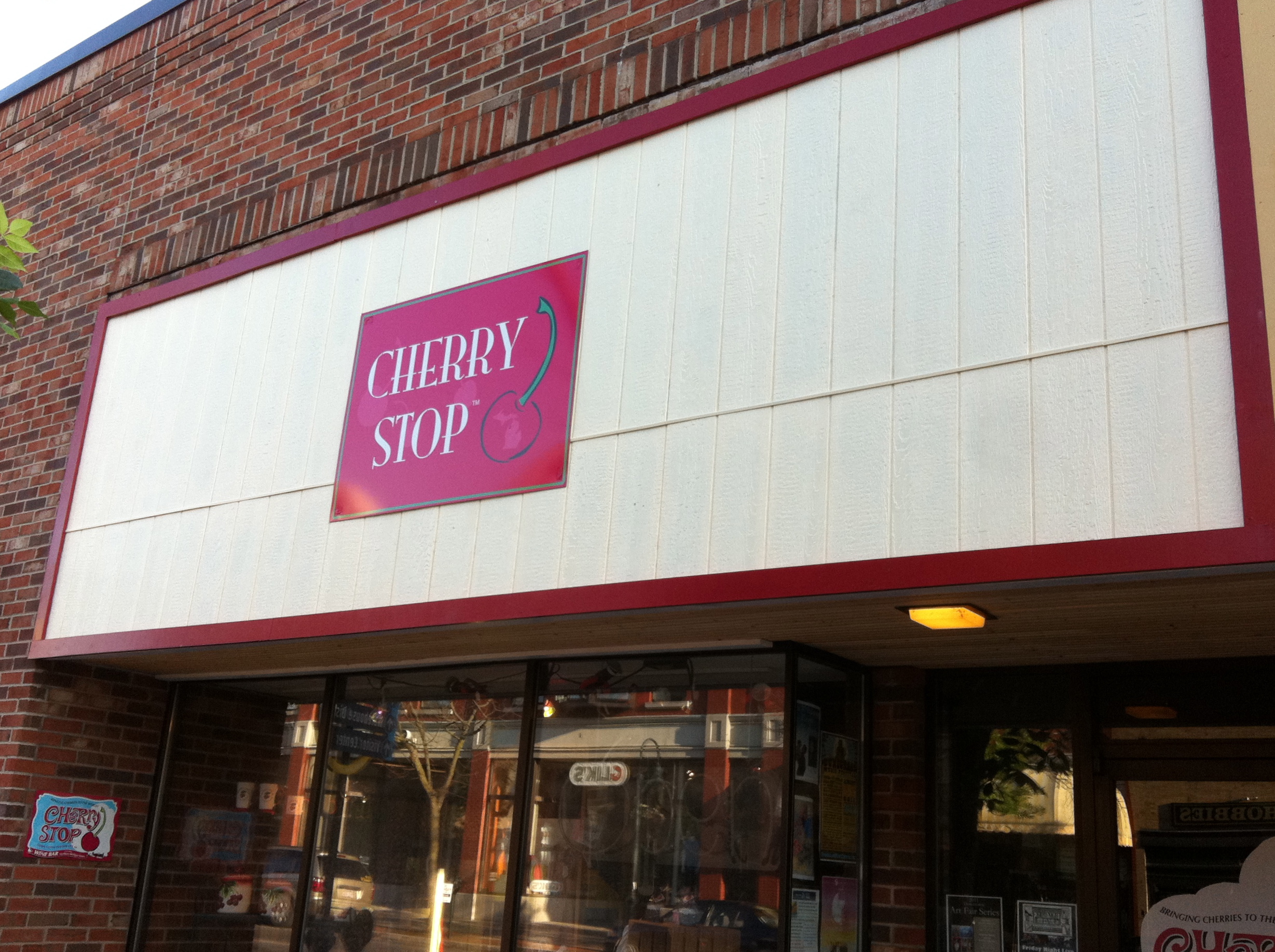 packages of dried tart cherries and other dried fruits. As demand grew, an airline wanted small bags of dried fruit to offer to their passengers, and our "Berry & Cherry Blend" was born. Situated in the heart of Traverse City, Michigan, the "Cherry Capital of the World," it was clear that demand for this delicious dried fruit would grow, and so could the business of "Bringing Cherries to the World."

We already understood that cherries tasted great and we knew great foods could be complimented with the tartness of the Montmorency red tart cherry. It became the mission of the Cherry Stop to make sure that everyone understood the power of the cherry. Product lines quickly expanded. In 1997, the retail store front for the Cherry Stop opened in downtown Traverse City.

While dried tart cherries were the main staple of the store, the Cherry Stop also offered jams, jellies and even condiments like salsa and barbecue sauce, all centered on the Montmorency tart cherry. This perfect little fruit just seemed to complement every food we tried it in. During the time downtown, all of the jams, salsas and wide array of other condiments were handcrafted in small batches, right in the Front Street kitchen. It was with great pride the owners at that time produced quality products using Michigan-grown fruits.

In 2003, the Cherry Stop moved to 211 East Front Street, the busiest street in downtown Traverse City. In 2005, Nick and Jamie Roster became the new owners of the Cherry Stop. The Cherry Stop became much more than a place to buy cherry jam and dried tart cherries, it was a place to find anything with cherries in it or on it. Cherry-themed gift items of all kinds were a part of the store, including kitchen items, bath and body items, candles, cook books, baby gifts and artwork. Many of the items were made locally by local artisans and local companies. The Rosters felt it was important to support the Grand Traverse region as best they could.

In January 2013, they moved into the new location next door, and changed the store name to Old Mission Traders. In addition to the Cherry Stop products, they introduced a line of house-made artisan foods under the Old Mission Traders name.

In February 2014, Nick & Jamie Roster made the difficult but rewarding decision to close the brick-and-mortar retail location and focus on producing their delicious artisan foods and distributing them throughout Traverse City, the state of Michigan and beyond. They took part in events like Cherry Festival and Michigan State Fair to share their products with customers, and they worked with dozens of stores around the state to carry their products with the goal to make it easier for Cherry Stop fans to find products in their own local markets.
Another tough decision came up in the spring of 2018, when the Rosters decided to stop producing and distributing Cherry Stop products and to sell The Cherry Stop. For several years, they had been producing the jams and a few other products for Harbor View Lavender Farm, owned by us, Bret and Sonja Richards. We decided we could not allow The Cherry Stop to be gone forever, as it had been a staple for so long in Traverse City, so we purchased the business, including all of the recipes, from Jamie and Nick in May 2018. After some experimenting in regards to which products to continue carrying by trying the products at our farm and downtown lavender store, listening to customers and their requests, we have determined which products to keep; gradually, we will continue to add some of the old products back in, as well as a few other fun cherry products.
In November 2019, we returned The Cherry Stop back to Downtown Traverse City in Front Row Centre, the same building as our lavender store. We are proud to continue using local fruit and making the products in small batches with less sugar and more delicious fruit flavor. We hope customers continue to enjoy these delicious products, a Traverse City tradition, for many years to come.
TOP
0 Items